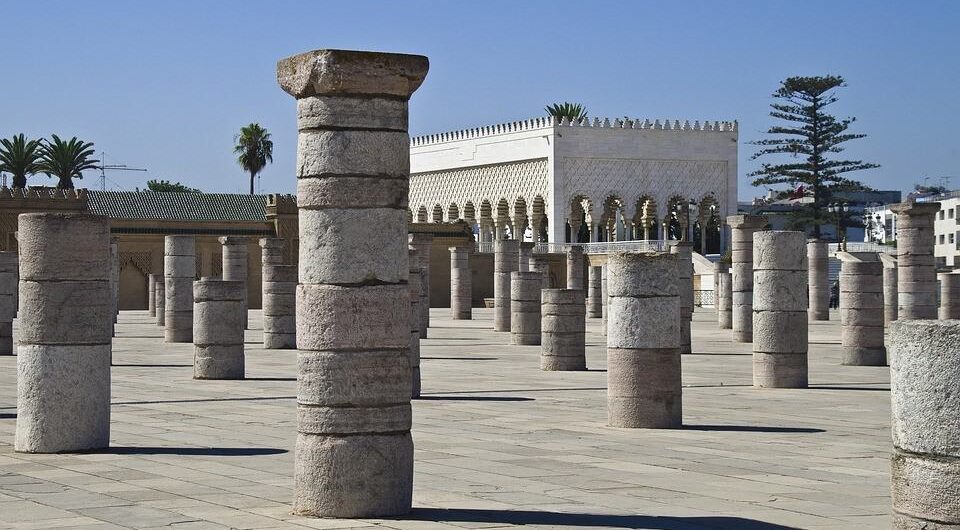 Morocco’s coastal capital since 1912, Rabat has just over a million people. Modern and even reserved by Moroccan standards, the city also has many fascinating historic sites, including the picturesque Kasbah of the Udayas, built in the mid-12th century. The unique Hassan Tower, begun at the end of the 12th century, was meant to have the world’s largest minaret but was never completed. Just opposite the tower lies the 20th-century Mausoleum of Mohammed V, another of the city’s main attractions.Begin your trip from Casablanca towards the capital of Morocco, Rabat. Get to see a lot of historical sites, gardens and the wall surrounding one of four Imperial cities of the kingdom.

things to do in rabat day Trip:

The Driver will pick you up from your accommodation in Casablanca, then starting the road to Rabat. You will spend several hours visit Challah, the Udayas Kasbah, the Mohamed V Mausoleum, and the Hassan Tower.

Morning departure from your hotel in Casablanca.

Visit the Mosque of Hassan II. Casablanca is home to the Hassan II Mosque, designed by the French architect Michel Pineau. It is situated on a promontory looking out to the Atlantic, which can be seen through a gigantic glass floor with room for 25,000 worshippers. Its minaret is the world’s tallest at 210 meters. It is an enormous architectural masterpiece and the second largest religious building in the world. On Fridays, the Mosque of Hassan II is open to non-Muslims. The Mosque of Hassan II’s promontory offers lovely views overlooking Casa in the residential Anfa quarter.

Next, take the road to Rabat for a half-day tour of this Imperial City.

Rabat has a population of 2 million, is the main university town, and the capital of the Kingdom of Morocco.

The city is located on the Atlantic Ocean at the mouth of the Bou Regreg River. On the facing shore of the river lies Salé, Rabat’s bedroom community. Rabat and Salé maintain important textile, food processing, and construction industries. The tourism industry and the presence of all foreign embassies in Morocco serve to make Rabat the second most important city in the country after the larger, and more economically significant, Casablanca.

During your tour you will learn Rabat’s history and enjoy its beautiful domes, minarets, wide avenues, and green spaces. Your guide will escort you on a walk around the picturesque Almohad northern walls of the Oudaïa Kasbah. Tour the Musée de Oudaïa, Moulay Ismaïl’s palace exhibiting collections of Moroccan folk art. Before moving on to city medina, relax in the Moorish style Andalusian garden.

Option to have tea and pastries at Cafe Maure.

In the medina, stroll the labyrinth of souks and artisan shops. Visit Place Souk el-Ghezel, the Wool Market Square on Thurdsays to watch the carpet auction. Take note of the ornamental motifs and moldings arranged on the doors of the residential area. Walk the famous and lively Rue des Consuls where foreign consuls were once obliged to live. Browse shops selling clothes, shoes, food, and other crafts. Shop for Moroccan antiques in Agadal. Visit the old Jewish mellah.

Lunch on traditional Moroccan food in a restaurant in the medina, with views of the Atlantic or in seaside Sale.

Next, continue to the Hassan Tower, which stands on the hill overlooking the Wadi Bou Regreg. A gigantic mosque, that is emblematic of Rabat and famous for the unfinished minaret where storks nest. Next door, visit the beautiful Mausoleum of Mohammed V decorated with stained glass windows, white marble, a wrought-iron entryway, and a stairway leading to an impressive dome. Next, on to Ville Nouvelle with its wide boulevards, open green spaces, and avenues lined with residential blocks, the Bank of Morocco, Musée de la Poste, and the Saint-Pierre Cathedral.

Visit the Musée Archéologie, which houses an extensive collection of archaeological artifacts, and the unbelievably beautiful Necropolis at Chellah, the last vestiges of the Roman town of Sale.

Take the road back to Casablanca, or return to your hotel in Rabat.

[ctu_ultimate_oxi id=”2″] [sc_fs_multi_faq headline-0=”h2″ question-0=”How long does it take to drive from Casablanca to Rabat?” answer-0=”1 hour, 22 minutes How long is the drive from Casablanca, Morocco to Rabat, Morocco? The total driving time is 1 hour, 22 minutes.” image-0=”” headline-1=”h2″ question-1=”How far is Rabat from Marrakech?” answer-1=”201 miles The distance between Marrakech and the coastal capital of Rabat, is 201 miles (323 km) when traveling by way of Casablanca. The fastest and most comfortable way to get between the two cities is by private transfer, which takes just 3.5 hours.” image-1=”” headline-2=”h2″ question-2=”How many days do you need in Marrakech?” answer-2=”Marrakech is the fourth-largest city in Morocco, and is one of the country’s major tourist spots. To see it, ideally you’ll want to allocate at least 2-3 days, although those with less time to spare can still enjoy the experience” image-2=”” count=”3″ html=”true” css_class=””]
Tags: RABAT DAY TRIP
Previous postNever Worry About What to Do About MARRAKECH DAY TRIP From Casablanca Again With These Tips
Next postThe FES DAY TRIP From Casablanca – Plan to FES Day Trip