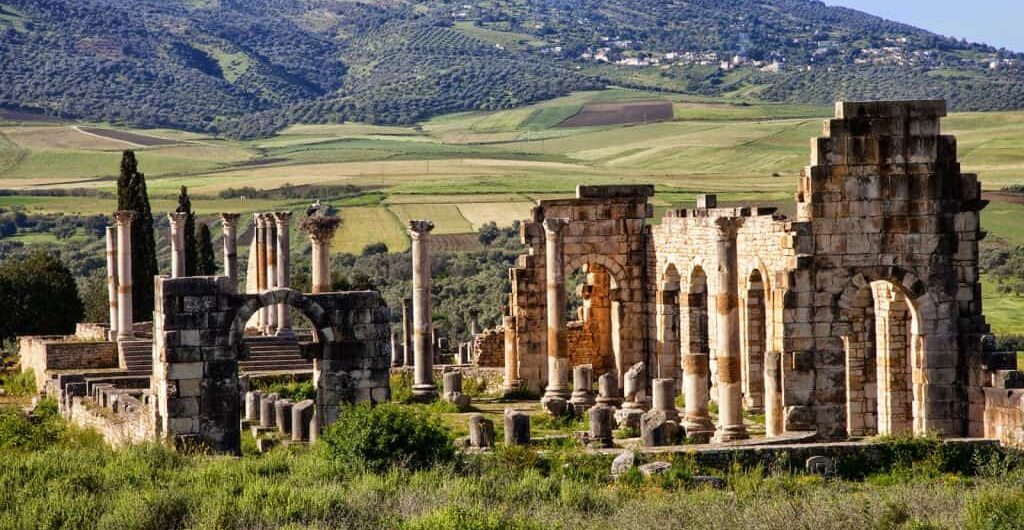 Fes to Meknes One Day Trip, Visit one of the four imperial cities of Morocco and see the Roman ruins of an ancient kingdom on a day trip from Fez. Explore the Medina of Meknes, go to the historic remains of Meknes  Volubilis tour and see the holy town of Moulay Idriss.Enjoy a special day trip to Meknes and Volubilis from fez with Guide Morocco Tours, from Fes to the forth imperial city that must be visited because of its beautiful big gates, large Kasbahs, its palaces, including Dar El Kabira where the royal family stays when they come to Meknes, its fortifications, and its large gardens. On the same day, we will visit the famous site of Volubilis archaeological site of 50 hectares the best preserved and the most visited of Morocco. You will be able to appreciate the greatness of the Roman vestiges: Caracalla’s Arc de Triomphe, the Basilica, and The Capitol.

READ More  Marrakech Airport Transfer: it's Not Difficult As You Think

Day trip from Fes to Meknes and Volubilis Key Detail :

things to do in Meknes  day Trip:

ONE DAY TRIP FROM FEZ TO VOLUBILIS and MEKNES included:

1 day trip to Meknes and Volubilis from fez:

After your breakfast in fes head to Meknes, The magnificent imperial city Meknes , you are going visit the mosque, Mausoleum of Moulay Ismail, Bab al-Mansour, Moulay Idriss and Place el-Hedim .

We start our Meknes day trip with a pickup from your Fes accommodations at 9 m. Then, head out to explore the ancient imperial city of Meknes, known as the “Versailles of Morocco”. See historical sites such as the impressive ramparts, monumental gates, and the Mausoleum Moulay Ismail. At its peak of glory, Meknes had over 50 palaces, 20 doors, and a city wall that measured around 45km. the Holly city of Morocco and Meknes, where you will have a magnificent view of the Medina. The tour begins with a tour of the walls with monumental gates dating from the seventeenth century Berdaïne Bab, Bab Khemis. Continue exploring the city by the stables (Rua), attics (HERI), and Stud. Stop at the Mausoleum of Moulay Ismail, the only mosque that non-Muslims could visit in Morocco for a long time. Exit through the famous Bab Mansour El on the vast square Hedim. On the other side of the square, the Museum of Moroccan Art “Dar Jamai” offers a wide variety of handicrafts for you to see. Then we visit the ancient Roman ruins Volubilis, where you will spend a some time exploring the 2000-year-old ruins and getting an idea of life during the Roman Empire. Continue to Moulay Idriss. On your way back to Fes, the driver can take you to see the view of the Medina from Borj North or South by request. Conclude your tour back in your hotel.

READ More  What is 3 Days Marrakech To Fes Desert Tours? And Why Should You Care

NOTE: The fes to Meknes day tour is available every day.

[ctu_ultimate_oxi id=”2″] [sc_fs_multi_faq headline-0=”h2″ question-0=”How do I get from Fes to Meknes?” answer-0=”It’s so easy to use train between Fez and Meknes. Use it. Yes, the train only takes about 40 minutes. You can get a taxi at the station to take you to the place where the Grand Taxis collect to take people to Volubilis.” image-0=”” headline-1=”h2″ question-1=”Is Fes Morocco worth visiting?” answer-1=”Fez el Bali is one of the main places where they are present. It is a true delicacy, and the butchers decorate their shop with camel heads and meat. It is quite honestly worth a visit.” image-1=”” headline-2=”h2″ question-2=”How do I get to Volubilis from Meknes?” answer-2=”You can get to Moulay Idriss and Volubilis from Meknes either by public bus, shared taxi or with your own car. If you’re more adventurous, hitchhiking there is also possible. I would suggest getting to the holy city first and then walk the remaining five kilometers to the ruins.” image-2=”” headline-3=”h2″ question-3=”How far is Volubilis from Fez?” answer-3=”The distance between Fes and Volubilis is 63 km. The road distance is 109.2 km. How do I travel from Fes to Volubilis without a car? The best way to get from Fes to Volubilis without a car is to taxi which takes 1h 26m and costs MAD 360 – MAD 430.” image-3=”” count=”4″ html=”true” css_class=””]
READ More  Best 4 days Morocco sahara desert tour from Marrakech to Fes
Tags: FES DAY TRIP PRIVATE DAY TRIP FROM FES TO MEKNES
Previous postWhat is Fes To Chefchaouen Day Trip? And Why Should You Care?
Next postNever Worry About What to Do About MARRAKECH DAY TRIP From Casablanca Again With These Tips