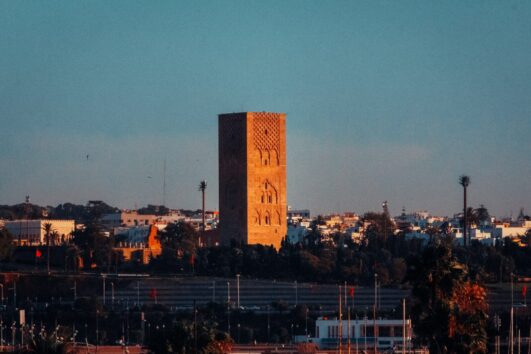 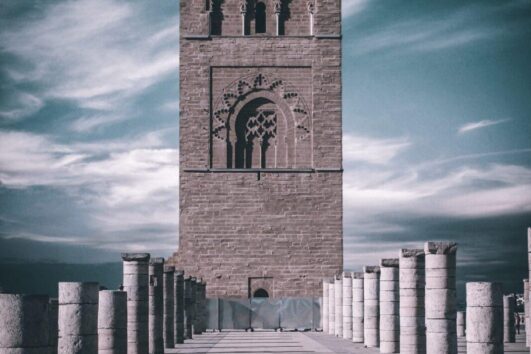 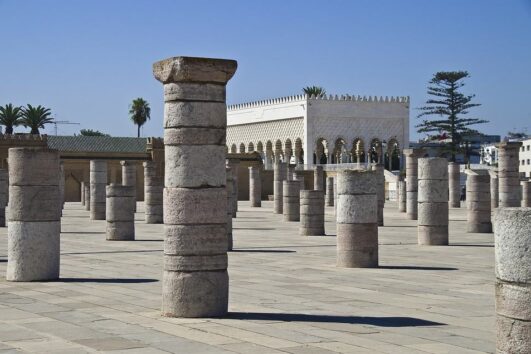 Enjoy Must Rabat Tour Guide And Tours From  Rabat With Guide Morocco Tours.

1) The Hassan Tower and the Mausoleum of Mohammad V

The Hassan Tower and the Mausoleum of Mohammad V are located along the Bou Regreg River. The neighborhood is perfectly quiet, as it is forbidden to honk the horn in the streets next to the monuments and it is also surrounded by a garden. The construction of the Hassan Tower began in 1195. At that time, it was supposed to be the largest mosque in the world. However, the sultan who commissioned the building died before its completion. An earthquake damaged the structure in 1755 and the Hassan Tower (tower) and its pillars are all that remains of the mosque. At the other end of Pillars Square and Hassan Tower is the Mausoleum of Muhammad V. The mausoleum contains the remains of the grandfather and father of the present king. The mausoleum is covered with intricate carvings and tile patterns that create a peaceful and beautiful space. We enjoyed walking around the square and climbing on the pillars. My daughter, Sydney, the animal lover, loved the horse guards at the entrance to the square.

Chellah is located in the suburbs of Rabat, along the Bou Regreg river. It is another ideal place to escape the noise and crowds of Rabat. Chellah was originally a Roman city called Sala Colonia. After the city was abandoned by the Romans, a necropolis and a mosque were built on part of the ruins and the area was walled. The ruins of Chellah are interesting, but what really caught our attention were the storks. There are tons of stork nests around Chellah, including one perched on the minaret ruins. We were very lucky because we were there in the month of March, which is the stork’s mating season. Storks are usually non-verbal, but during the mating season, they make a very special clack to attract a mate. We liked to walk through the ruins and listen to the storks clacking. We also discovered that Chellah is a great place to play hide-and-seek. Sydney did an excellent job of hiding among the ruins.

The Museum of the Udayas is installed in the former Palace of Moulay Ismail. The museum contains a large collection of jewelry and clothing from each region of Morocco as well as Roman and prehistoric jewelry. Although the museum is small, it is still interesting and very cheap to enter. But what makes this museum particularly pleasant is the enclosed garden in front of it. Many locals come to the garden to have a picnic or a snack and to sit and enjoy the moment. In the garden there are women who offer to apply henna on their hands or arms. During our stay in Rabat, we often returned to this garden to sit and observe everything that was happening around us. Sydney met one of the museum guards, Mohammad, who was very kind to us. During one of our visits, Sydney spotted a turtle and pointed it out to Mohammad. Mohammad went to pick it up and put it in Sydney’s hands. Sydney and I finally took the plunge and allowed one of the women to apply henna. Now the real test is to see how long it will take for it to wear off. It takes 2 to 3 weeks for the henna to wear off.

The Kasbah is perched on a cliff and is the oldest part of the city. At the foot of the cliff, the Bou Regreg River and the Atlantic Ocean meet. The Kasbah has a pleasant appearance with its narrow and winding streets and its whitewashed houses lined with blue. Many of these old houses have beautiful old doors. The streets of the Kasbah are narrow and there are few cars. It is also composed of mostly residential houses, making it a very discreet place to stroll through the streets. Traffic is not avoided here in the Kasbah, which can be a relief after walking in other parts of Rabat. The Kasbah has a superb view of the Atlantic Ocean where we had the

Although the museum is not impressive from the outside, it is worth a look. The museum contains many beautiful prehistoric and Roman artefacts found in Morocco, including many bronze statues. While visiting the museum, my husband, Jason, and I enjoyed looking at the intricate bronze statues. Sydney, however, had fun giggling at the nude male statues. She would examine each statue and if it was a man, she would announce “Yes, it is a man” and start laughing. Ah, I must admit that these Romans never left much to the imagination. Unfortunately, the museum does not allow pictures.

Although the Jardin Exotique is not located in Rabat, it is a relatively short bus or large cab ride from the north and is well worth taking the time to see. Marcel Francois, a French horticulturist, built the garden in 1951. The garden is overgrown with vegetation, but what makes the garden interesting is the way it has been designed. It is laid out like a maze with tunnels, suspension bridges and bamboo bridges. One can easily spend several hours walking around the gardens and climbing over and under things. Sydney had fun guiding us through the garden. There are also several ponds at the back of the gardens where you can see koi, turtles and frogs, which Sydney is very happy about.

The Rabat zoo is one of these surprising gems and is the ideal place to visit for everyone, not just children. Rabat Zoo is home to many of the animals you dream of seeing on a safari in Africa, including elephants, lions, rhinos and hippos. What is really nice about the zoo is that most of the animals look like they are in their natural habitat and not in cages. What made our visit even better was that we practically had the place to ourselves the day we went there. No crowds and a natural habitat, what more could you ask for in a zoo?

And of course, no trip to Morocco is ever complete without a visit to a medina. Unlike Fez, which has a labyrinth of winding alleys, the medina of Rabat is easy to navigate. I have heard that being trapped in the medina of Fez will drive you to madness or tears just trying to escape. However, the Medina of Rabat is not like the Medina of Fez. It is a very discreet medina and you will not have to worry about buying things or being pressured. The medina offers everything you might wish to buy, from souvenirs to fresh produce, flat screen TVs, and for Sydney’s enjoyment, pets of all kinds.

Reader’s tip-Rabat is where you will find lovely, quality handicrafts without the hassle of vendors continually pushing you to buy from their shops. We are sharing some of our best spots for fab Moroccan treats-.

we offer you the most amazing and attractive Tours From Rabat, Rabat Medina, Rabat trip,Rabat Riads